Bitcoin Tumbles While Market Optimistic About the ‘Main Bull Phase’

The most popular cryptocurrency bitcoin (BTC) corrected lower today despite positive news and generally optimistic sentiment in the market.

Meanwhile, among those who are openly bullish about the prospects of BTC is Dan Tapiero, Co-founder of the crypto-focused private equity fund 10T Holdings. According to him, the logarithmic chart of bitcoin “projects up 5-10x on this run,” while adding that the asset is “just breaking up now.”

@CTAR16865900 @RaoulGMI Yes. Much higher. Didn't want to be too sensationalist in headline. Chart below suggests 38… https://t.co/3rQHTCEymz

Also, Matt Maley, Chief Market Strategist at investment advisory firm Miller Tabak + Co, told Bloomberg yesterday that “it looks like [BTC] wants to test its 2019 highs of USD 13,800 before it sees a meaningful correction to work off this overbought condition.”

Others, however, do not rule out that BTC might go even higher before a correction happens:

“The level of USD 10,000 has represented a strong psychological barrier for bitcoin for the last few years. Now that barrier is broken and there are no major levels of resistance on the graph until the all- time high at USD 20,000,” Mati Greenspan, founder of Quantum Economics, told Bloomberg.

Expressing a similar sentiment, the popular BTC analyst Willy Woo said that the bull market in bitcoin has really been on for some time already, while the recent rally should be considered the beginning of the “main bull phase.”

One of the themes is the legitimisation of BTC for large institutional funds, and also the easy accessibility to bu… https://t.co/mfSGcJ87eg

Also up for discussion today was the relationship between bitcoin and ethereum (ETH), and whether a BTC move towards new all-time highs will hurt or help the price of ETH. Responding to a Twitter poll about this from Su Zhu, CEO of Three Arrows Capital, the popular BTC trader WhalePanda said:

So far, ETH outperformed BTC in the past month, past quarter, and in a year by a wide margin (ETH is up by 81% in a year, while BTC is unchanged).

Meanwhile, The Telegraph reported this weekend that bitcoin is on the verge of overcoming a perceived “credibility hump” among institutional investors. According to the newspaper, a British fund group with “tens of billions of pounds” under management is reportedly looking into bitcoin, saying they believe it could see a fivefold price increase by 2023 as a best-case scenario.

According to the article, the fund could end up diverting up to 30% of its capital currently allocated to gold into BTC, with the fund manager reportedly saying that the investment case for gold and bitcoin is the same.

“I believe we are approaching the now-or-never moment for bitcoin before institutional investors adopt the asset,” the unnamed fund manager was quoted as saying.

Meanwhile, US-based major business intelligence company MicroStrategy said today that it has purchased BTC 21,454 at an aggregate price of USD 250m, inclusive of fees and expenses.

"MicroStrategy has recognized bitcoin as a legitimate investment asset that can be superior to cash and accordingly has made bitcoin the principal holding in its treasury reserve strategy,” Michael J. Saylor, CEO of MicroStrategy, said.

Before the correction today, reflecting bullish market sentiment were also popular indicators, with for instance the crypto Fear & Greed Index indicating “extreme greed,” and Augumento’s Bitcoin sentiment score showing a reading of 0.908, where 1 is the most bullish sentiment possible. 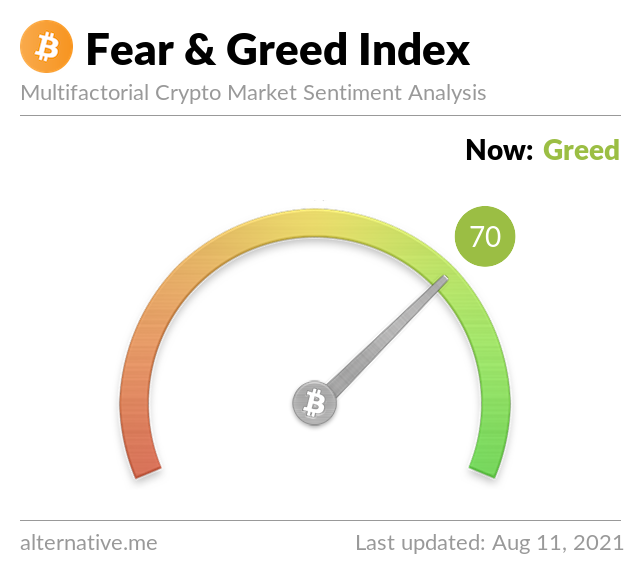 A Whole Lot of DeFi and 20 Crypto Jokes

Why Are Chinese Banks so Keen to Lodge Blockchain Patents?

Hype is Not Enough to Move Bitcoin price - Research

New Highs For BTC Unlikely in 2018, China Could Help - Investor